Risk: Black Ops is a limited edition of the approaching re-vamp of the Risk rules. Presenting Objectives, Capitals, Cities and Rewards the risk game has ended up about finishing Objectives rather than Global Domination. World Domination may even now be played with the redesigned components. In the upgraded Risk, the target is to be the first player to finish 3 Objectives and be in control of your capital. Since its initial release back in 1957-1959, RISK has been a much-enjoyed board game by strategy fans everywhere, and there were even some unofficial expansions designed to spruce up the old RISK game. For much of its existence, the game pretty much had the same basic ruleset that even its offshoots and variations followed. Read also Risk Game Websites by Sonny Go.

But in 2008, a new version of the board game RISK came out with revised rules, introducing various features that give players new ways to play RISK with friends. It sought to make RISK play much faster, and thus be more attractive for gamers who may not have as much time to dedicate to classic RISK. Perhaps it was indeed time for a change, especially with the game approaching its 50th anniversary at that time.

The revised edition of RISK sought to add new flavor to the game, which has shaken up the RISK playing world by providing lots of new additions to the already established strategy board game. RISK: Black Ops was the preview of this new RISK, putting these new rules in a good light by emphasizing the good parts with thematic treatment.

First off, Objectives have been added as an alternative to the usual Global Domination gameplay mode, which both brings new dimension to RISK and makes for shorter games. This addresses the one major flaw with RISK, which is that it usually takes 4-5 hours to complete, or even longer with more players.

But with the inclusion of Objectives mode, players can enjoy RISK within a couple of hours and not dread a long session. Of course, you can still play Global Domination if you want to. But if you just want a quick game session and have passed over RISK before due to its length, then you need not pass over it anymore with this game. 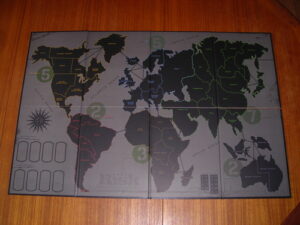 The world map has 42 territories like in classic RISK, all with the same values. This game is for 3-5 players, unlike classic RISK’s maximum of 6. Instead of simulating the Napoleonic era, this one follows the modern era as the subtitle suggests.

In the Objective mode, winning is no longer about occupying all 42 territories, but being the first player to get 3 objectives. The game consists of 6 major objectives and 6 minor objectives.

At the beginning of each game, 4 of 6 major and minor objectives are picked at random. You can take any 3 of these 8 objectives to win the game, regardless of combination. Each objective is then assigned a major and minor reward respectively at random so capturing them actually gives players an advantage.

Each player has a Capital, which is deployed during initial troop setup. Its purpose is to serve as both objective and source of extra reinforcements. You’re able to control an enemy capital to get more reinforcements as a result, giving you a considerable advantage that can snowball as you take over more.

Fifteen territory cards are drawn at random to have a marker placed on them to designate each as a “City” before being reshuffled back into the deck. Troops are then counted for each player—30 for 3 players, 25 for 4, 20 for 5. The first player is then randomly chosen, then the game commences. 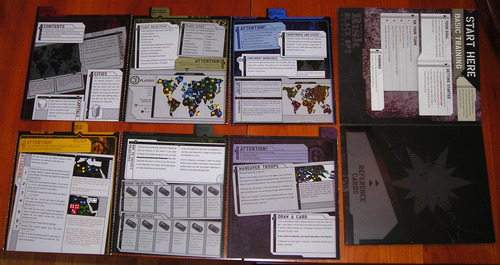 Drafting troops are similar to the classic RISK game, but with a few differences. For instance, territories with a city count as 2, and each capital you control gives you an extra troop. Also, there is no more maximum for holding cards and you can turn in any number of cards. Otherwise, continents and the minimum of receiving 3 reinforcements are still the same.

If an objective is achieved at the end of an attack phase, that player claims that objective and its corresponding reward. If two or more are achieved at one time, one must be chosen over the others. Players can only claim one objective per turn. 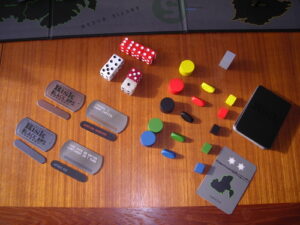 Other than these changes, everything else plays like the RISK game of old. That makes getting into RISK: Black Ops easy enough for RISK fans, although it can be a bit of a stretch for completely new players.

It has been a worthwhile experiment so far. Perhaps some longtime RISK fans would lament the changes that were seemingly designed to speed things up, which may seem like missing the point of RISK. However, these changes do make the game much more dynamic, and it’s not like Global Domination is no longer possible to play.

As far as being an overall package goes, RISK: Black Ops is indeed well made. While it’s mostly a prototype for RISK Revised Edition, it doesn’t play sloppily at all. It just shows how much care has been given to its design, showing that they were serious about updating RISK for younger generations.

If you do get a hold of it, you’ll find RISK: Black Ops to be a great addition to any board game.

Other variations of the Risk board game: