Well before the release of the now-popular Risk Metal Gear Solid V: The Phantom Pain, there was an interesting MGS game that came out. It was the MGS variant of RISK, or perhaps the RISK adaptation of MGS. Putting the storied video game franchise into board game form seems quite foolhardy, but it doesn’t do too badly at all as a RISK game. In fact, you might actually want to pay attention to this one.

Based on Risk Metal Gear Solid IV: Guns of the Patriots, this game is a bit less about being Solid Snake and more about the geopolitical stuff that usually runs in the background of the series. This version of RISK takes after the new revised rules system that first came out with RISK: Black Ops. With a few adjustments, they’ve managed to tailor it to the MGS universe. This crossover is all about bringing fans of MGS into playing RISK, and perhaps also vice versa. 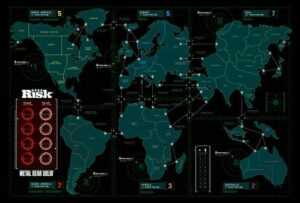 The game has a board that has 6 zones and 42 territories, along with 275 custom pieces that represent the 5 PMC armies, neutral parties, and cities. There’s also the Outer Haven battleship, 8 Boss cards, 40 Drebin’s Shop cards, 42 Territory cards, 8 Rewards, and 7 dice. All of these, weighing 3.4 pounds, are contained in a box featuring artwork by the famed MGS art director Yoji Shinkawa.

A game can be finished within 2 hours through the set objectives, which is significantly faster than most RISK games. However, you can still play with global domination rules that should take 4-5 hours like in classic RISK. It plays similarly enough to most RISK games, but there are additional mechanics that need to be understood before playing. 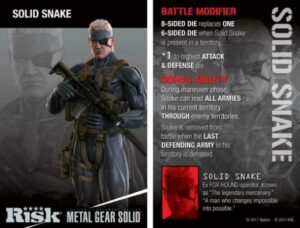 Instead of playing as Solid Snake who likes to sneak up on unsuspecting enemy soldiers, you play as one of the five Outer Haven private military companies capturing territories in a “game of strategic conquest.” These PMC groups are Praying Mantis (Green), Pieuvre Armement (Orange), Raven Sword (Purple), Werewolf (Blue), and Otselotovaya Khvatka (Yellow).

Whichever you choose to play with, all players are after the same objective—conquer everything. Aside from the usual world map, you must also occupy Outer Heaven, the massive battleship that was once Liquid Ocelot’s base of operations, acting like a moving continent on the board.

As a neutral territory, Outer Haven’s movement is determined by dice roll into one of 6 pre-determined locations, one in each territory. When someone occupies it, that player can move it to any docking station they choose, which lets him unload his army onto any enemy territory as he pleases.

Aside from the additional territories and thematic novelties, there are other things that make RISK: Metal Gear Solid different from most other RISK varieties. For instance, there are the Drebin’s Shop cards that provide additional attacks and defenses, which can be very useful when in a jam.

There are also boss cards that bring in an 8-sided die instead of the usual 6-sided die to give invading or defending armies an advantage. They’re a bit similar to the Commanders in RISK 2210AD and the Gods in RISK Godstorm. However, no two players can have the same boss in this game.

Each boss has a bonus ability that add something different to the game, depending on the situation. But before you can have one, you need 3,000 Drebin points to hire and 1,000 more each turn to keep them on your side. This means getting a boss is quite an investment, but can be very advantageous as long as you know how to play the boss you end up getting.

The reinforcement system is another noteworthy addition. By taking over at least one enemy territory during your turn, you get a territory card with one or two stars on it. In your succeeding turns, you can trade in stars for reinforcements, which drop off on the right fo Madagascar. You get to choose when you can trade them in, and so can your opponents.

As a RISK game, this one is fairly solid and can be recommended for those who like strategic board games. The packaging and materials are of good quality, so they can sit well in any board game collection. Its gameplay is quite interesting and engaging, especially for those who are familiar with the classic RISK game. As a RISK game that makes use of the “Black Ops” gameplay system, it has been translated seamlessly here.

It has a some similarities to other varieties like 2210AD, Black Ops, Godstorm, and Halo, but it doesn’t look or feel like a copy at all. It’s definitely its own game that carries the Risk Metal Gear Solid theme well. Even if you’re not an MGS fan, you can still appreciate it for its quality.