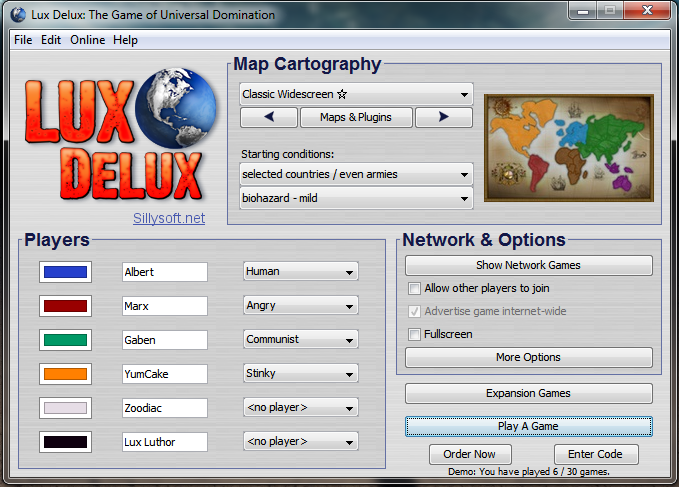 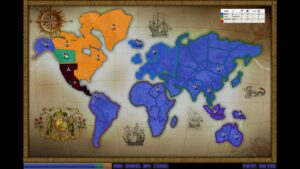 Lux Delux Risk game is a Risk clone video game that was originally released in 2002 by SillySoft Games. While this game doesn’t offer any real mode differences, unlike most other Risk games which usually do, it really shines in taking the Risk concept and carrying over to different maps. Learn more about other Risk variants.

Recently, SillySoft made a big drive to get Lux Delux through Greenlight, and I’m happy to say that they succeeded, so if you use steam regularly, you can get the game through them at the same price you would on SillySoft’s website. 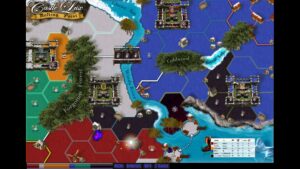 The first thing that always needs to be mentioned when reviewing Risk games is how faithfully they recreate the basic experience. Well, Lux Delux Risk game is a toned-down, highly fluid version of the classic game we all know. You won’t find any roll animations, no fight animations like you would in Risk II or Risk: Global Domination. It’s just you, your soldiers the map and your enemies.

While it all may seem little bare bones, it actually lends itself perfectly for a fast-paced Risk playing game. You click where you want to attack, and all the rolls are done automatically within the game engine, and you can even ctrl + click to do ALL the attack rolls for the army you are attacking with, so it really is incredibly fast paced.

That being said, you do miss out on the fun of seeing the dice roll and the anticipation of what numbers are going to fall, so if you’re aching for the traditional Risk gameplay, this game isn’t for you. 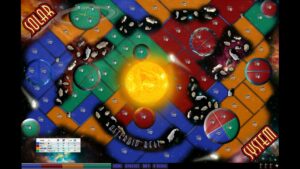 One of the great things about Lux Delux Risk game is that it takes the classic Risk game and transposes it to over 800 (no kidding) maps created both by SillySoft games as well as players within the community. There’s no way I could list all the maps here, but just to give you an idea, you’ll find maps with Europe territories, hex-shaped tile maps, maps based on specific parts of different countries, hell, there’s even a map based on the Solar system.

Each map in Lux Delux comes with its own individuality and little customizations, from different unit types then you’re used to (so for example, one map had medieval units), to different border mechanics. Part of this border mechanic is the ability to set ‘biohazard’ levels, which actually block off certain tiles from being accessed, so even one map has many variations which change the strategy. 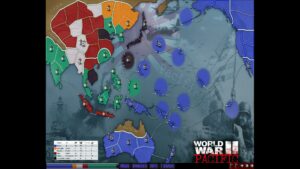 You also have two options of how you want to play this: Single-player or Multiplayer.
Single-player pits you against the AI, and in testament to the movable nature of Lux, even the AIs can be designed by the player community. Difficulties range from easy, all the way to hard, and when I say hard, I actually mean hard, and not “this is just a game” hard. In fact, one of the AIs released earlier this year (2015) uses Monte Carlo Tree Search algorithms, which means that the longer you’re the player, the smarter it gets.

Multiplayer, on the other hand, allows you to play online with other people, and play with a mix of real players and AI, up to a maximum of 6 in total. Now, while this is an old game, there’s still around 100-200 active players, so it’s very likely that you’ll find people to play online with. SillySoft even supports leaderboards and world rankings, so you can throw your hat into the ring and see if you can compete with the big boys. 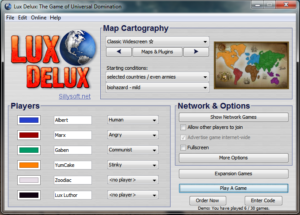 The biggest difference between Lux Delux and the classic Risk game is that you can no longer rely on the typical strategies you do with the classic map. The first few times I played some of the different maps of Lux Delux I got my A** thoroughly handed to me. It wasn’t necessarily the fact that the AI was smarter or better (I had picked medium AI for my playthroughs), but that the maps themselves required much different tactical and strategic considerations than I’m used to on the classic maps.

In fact, I actually had to load the classic Risk map (which is available) and play that to make sure that I wasn’t just a completely terrible player all my life. I’m glad to report that I totally annihilated the AI on that occasion. So really, before you start playing online with other people, you’ll want to hone your skills against the AI in single-player. 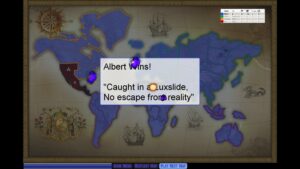 All that being said, playing Lux Delux Risk game is incredibly fun. The change of map forces you to think outside the box, and adapt strategies on the fly. The fast and fluid pace of Lux Delux means that sitting and thinking too much will hamper you more than help you. Most importantly, Lux Delux takes the game we all love and multiplies it’s replayability a hundred fold.

In addition to that, if you have the time and skills, and really love being creative, you can download the SDK (software development kit) that SillySoft has released and create your own maps and AI that you can then share with your friends and play online against other players. Maps and AI even have a rating system, so you can get some feedback on your creations.

For $10 this is a must buy for any true Risk lovers. And hey, if you still aren’t convinced, you can download a demo version that lets you play 30 games before asking you to pay.

See a full review on Lux Delux Risk game – article Part 2. You can also download a free demo or purchase a copy of Lux Delux, The Game of Universal Domination from SillySoft by following this link – http://sillysoft.net/lux/.