Risk II took the classic board game Risk and brought it to the home computer. It was originally released in 2000 and developed Microprose. It was the first official opportunity for gamers to play Risk on a computer, and it also gave them a chance to play Risk online with friends. Much like the previous Risk games, Risk II brings with it the good old strategy gaming that we’ve all spent endless hours playing, as well as two new Risk game playing modes to the franchise: Same Time Game and Tournament Mode. This version also brings with it a great local multiplayer Risk component.

While a little bit outdated at this point, Risk II’s graphics were pretty good at the time, and even nowadays, the graphics are pretty, bringing the gameplay back to basics without too much fanfare and hoo-ha. 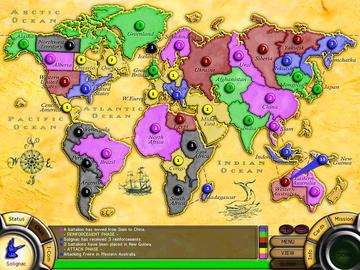 Aside from the three different gaming modes, which we’ll talk about a little bit later, Risk II allows you to set different conditions where you can win the game. The choices are fairly simple, but allow for a bit of variation in gameplay, they are; Domination mode, with three different percentages (100%, 80% and 60%), Capital mode, which involves capturing the capital of an opposing player, and Mission mode, which usually sets you a random objective, mostly along the lines of capturing certain continents, such as North America and Australia.

Additionally, in Risk II, you have a lot of freedom in setting up the game itself. You can switch off seven different connecting areas as you wish to alter the difficulty, as well as changing how many reinforcements each continent gives when a player has it completely under their control, although it has an upper limit of 10. Territory allocation can be done either randomly, by grabbing, or by election, and trading the Risk cards is pretty much the same.

Finally, Risk II has a component where you can play Risk online, but that’s pretty much dead these days. Fortunately, Risk II supports Hot Seat, so that you can play Risk with friends on the same computer, or via LAN which is always fun if you get a group of friends with laptops or computers together. All that being said, though, the best way to play Risk II is as a single player, rather than multiplayer, and that’s where its strengths lie.

Playing RISK Against the Computer

Since playing Risk II is mainly made for a single player, the computer generated AI (Artificial Intelligence) is really incredible. Be prepared if you want to play Risk against the computer. It is ruthless, smart, and it ‘knows’ how to play the game really well. One big problem that all board games have when they are designed to play vs a computer is that the AI tends to get very cheaty, with one massive example being the board game Catan, where the developers are more than happy to admit that the AI cheats to win the game. Thankfully, this isn’t a problem at all with Risk II, as the computer has no control over the die, and in my playthroughs, the rolls always seemed balanced, never favoring me or the computer.

Aside from that, the AIs are grouped into different personality types, all named after 18th and 19th-century generals, which is a nice touch. Each AI personality in Risk II has its own style of attack and reliability in honoring alliances, which they can and do propose themselves. Given that the AI can propose and form alliances, it’s good to note that they don’t often gang up on the player, another sign that the AI is programmed well, and offers a genuine and real challenge. 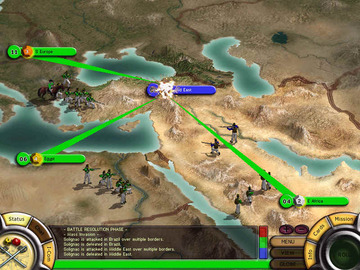 Classic Risk: This is the risk that we all know so well, nothing has really changed, other than Risk II making it, even more, fun to play the game.

Same Time Risk: This is the new mode that Risk II and boy are it a doozy, with it being almost completely different than what you’re used to.

Firstly, as the name suggests, you do not complete all your actions in the same turn, and then have the next player do it and so on. Instead, all players pick their attacks, as many as you want. You can also choose to use more than just one army to attack a border territory, in what is called a “Mass Invasion”. Once all players have picked their attacks, they are resolved, and then you move on to the next action, which is transferring of troops. Finally, you get your reinforcements and being the process anew.

As you may have summarized, players are only allowed one movement per army per turn, so you can’t really go rampaging through the map with a massive army. That being said, there is an option for a “Surge Attack” which allows you to thrust a certain amount of soldiers from a newly acquired territory into a neighboring one. Also, if two different players attack the same territory, and the defending player fails, then a “Spoils of War” battle ensues at the end of the round between those two armies, or whatever is left of them at least.

In addition to all that, the dice in Risk II’s same time mode are completely different. If a player attacks with two armies, then twice are used, if they attack with three armies they use three dice, and so on. So for example, if you were attacking Ukraine with all the surrounding territories, each army would be considered a different die. Deaths are handled on per dice basis, so if the defender rolls a 2, and the attacker rolls 1, 4, 5 and 4, then the defender would lose 3 troops. On the other hand, if the defender rolls a 5, and the attacker rolls a 2, 4, 4 and a 6, then the attacker would lose 3 troops from the respective armies. 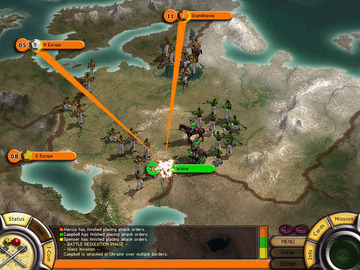 Finally, the dice themselves are also different. As the army becomes larger, the dice change color and become more ‘loaded’. For example, if you attack with a small army of 4, you would use a white dice, which tends to roll lower numbers, whereas if you attack with an army of 30, you would roll with a black dice, which tends to roll on higher numbers (primarily 5s and 6s). So really, the advantage here is more on having large armies than anything else.

As you can tell, this mode makes the game much more dynamic. Turtling strategies don’t really work that well here, and sitting protecting borders isn’t always the best option. Having large and fluid armies is generally the best strategy in this mode, so it definitely offers a more aggressive and fluid style of play.

Tournament Mode: This mode is actually quite fun. You play through 16 rounds that are a mix of classic and same time Risk, with the focus being on scoring the most points. As the rounds progress, the games get increasingly tougher, and should you die at any point, the tournament ends for you. While there is a scoreboard pre-filled with different players, the majority of the fun comes from your own personal ability to withstand 16 rounds of Risk.

Risk II is a brilliant entry into the Risk game franchise, being great both for beginners, and experienced players. The new mode offers a lot of interesting gameplay, and the AI is going to be challenging you all the way. While this game is great to play Risk as a single player, if you prefer to play Risk online with friends, or as a multiplayer, you could always Hot-seat together and play Risk against the computer (or each other) or alternatively, you can LAN it up with a few friends. See also what are other Risk Game Variants and rules to play with friends.