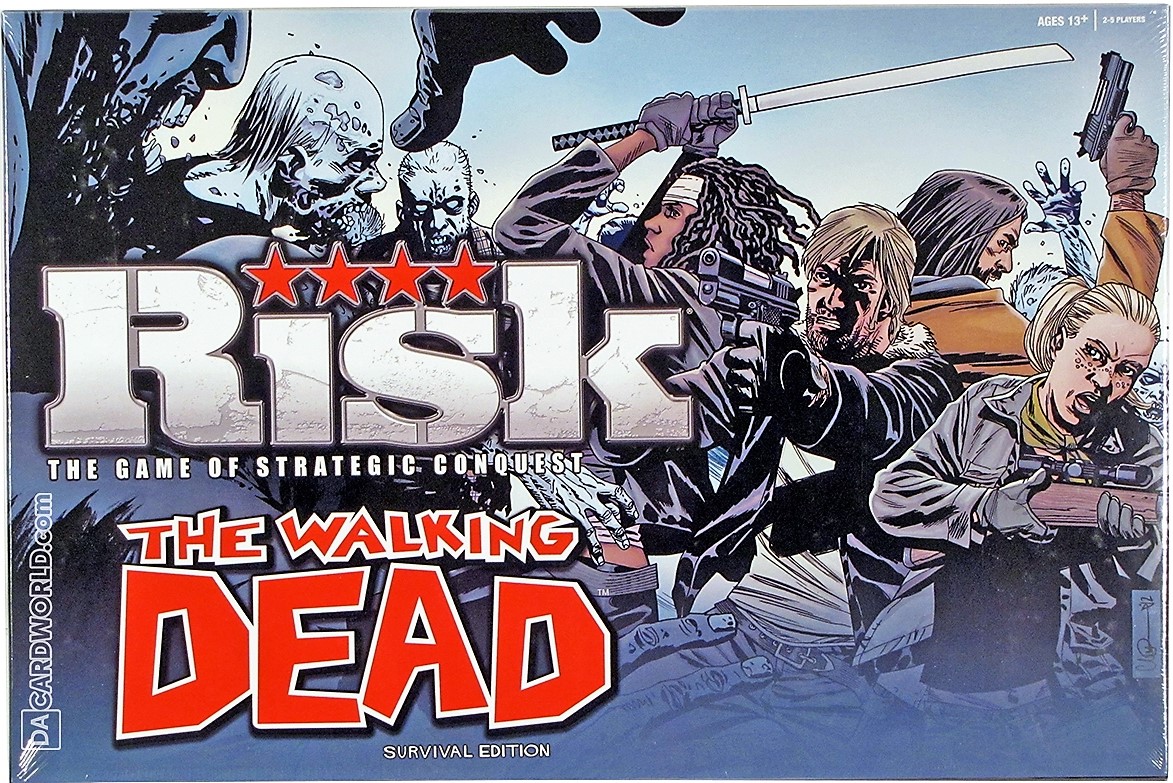 While most would say that zombies are old hat at this point, there’s still quite a fascination out there when it comes to the concept of the zombie apocalypse. Civilization being reduced to a barely functional state due to the spread of a virus or curse that turns humans into flesh-eating zombie may seem like a nightmare, but also a rather macabre scenario that gets people think about how they’d react to such a catastrophe.

The Walking Dead is one of the many fictional works that delves into just that, telling very human stories amid the backdrop of an unforgiving zombie-infested world. RISK: The Walking Dead Survival Edition captures the essence of that struggle into strategy board game form, letting you experience a bit of that drama by battling the zombies to retake human civilization right in your own home without having to be in a zombie apocalypse yourself.

As the leader of a group of survivors, what you do here may decide the future of the human race amid this zombie threat. There are other survivors as well, but they may not be very friendly as they’re also desperate for resources. That puts another dilemma on top of the zombie situation, which certainly isn’t getting any better.

RISK: The Walking Dead Survival Edition takes the RISK gameplay into the zombie apocalypse, wherein the survivors fight against each other while fending off the zombie horde by claiming more territory for more resources. The map itself has 32 territories split into 6 zones and is based on the American South, where the Walking Dead is set in.

This game is based more on the graphic novel itself and less on the television show or the series of adventure titles by Telltale Games. Also, this is less about human survivors against the zombies and more about groups of survivors battling for resources while the Walkers, which is what zombies are called in The Walking Dead, continue to roam free and terrorize the remaining human population.

RISK: The Walking Dead Survival Edition can be played by 2 to 6 players and comes in two modes of gameplay—Conquest and Survival. Conquest is best played between 3 to 5 players and is pretty much playing the game like an updated version of Classic RISK board game, while Survival is best played by 2 to 4 players and is unique to this game as it fits the theme of The Walking Dead. The latter is a fast-paced gameplay mode and pretty much the main reason for getting this game.

As with most new iterations of RISK board games, this version has a fixed number of turns, and the end of the last turn signals the end, and whoever controls the most number of territories at that point wins the game. However, players can choose to continue playing the game until someone comes out the winner, so at least you do not have to end the game just when they happen to be getting good.

The Walking Dead Survival Edition of the RISK board games provides players with a deck of Territory cards, and a deck of Event cards, from which players draw one card at the start of each turn. Each of these game cards contain a story event that happened in The Walking Dead, and players are met with either rewards or penalties, depending on the particular game card drawn. Then there is a deck of RISK Game Supply cards that provides strategic options, as well as a good bit of flavor that suits the theme. This adds more tension and unpredictability to the game, much like how things would be in a zombie apocalypse.

During each players’ turn, you must first resolve Walker Outbreaks, draw an Event card and have it resolve, and then deploy reinforcements to bolster your Survivor group. Upon finishing deployment, you may then invade Territories as you see fit. Finally, you make one maneuver and collect an ammo crate if possible, and that ends your turn.

On the Walking Dead RISK game board, some Territories have Guard Towers, which gives you +1 defensive bonus to your highest die roll while defending. One Guard Tower is present in West Central Prison, but additional Guard Towers may appear after accomplishing certain Events. Placing them on your most valuable Territories helps you secure your position on the board.

You may also collect a Grenade from an Event. It may be used during a battle to let you re-roll a die as you choose, after which you must then discard the Grenade as it has been used up. These Grenades are powerful as they can potentially turn the tide of what may look like battles that are seemingly impossible to win.

RISK players who are fans of The Walking Dead may find this to be an interesting game. Even for a RISK game, RISK: The Walking Dead Survival Edition is rather unique with both its theme and the way it bends the RISK ruleset. It’s a pretty good twist of the Classic RISK gameplay that strays away from its usual trappings of warfare and more into the realm of survival horror.

Players have surmised that much of the tension in the game is from trying to uncover a Walker territory. Once one is revealed, it does take the threat of invasion for that particular territory out for some time. This makes things in the game more predictable for the next few turns, which makes for less tension. You can implement a house rule wherein you reshuffle territory cards after each player’s turn if you want to keep the tension high, but that’s up to you.

Other than that, this is actually one of the better versions of the RISK board games out there. RISK: The Walking Dead Survival Edition is actually good because it doesn’t play exactly like the Classic RISK board game due to the presence of Walkers on the map, which are a real strategic threat that mixes things up. If you’re a RISK game veteran, you better leave your RISK hat for this one as you may find it rather different from the usual RISK game.

There are a lot of variation of the RISK board game out there. There is even a large selection of online RISK games to choose from. So whether you enjoying playing RISK with friends sitting around a table, or whether you want to take on the challenge of playing RISK online against a computer or other players from around the world, it doesn’t matter. RISK The Walking Dead Survival Edition is not a game that you will put in the shelf for the sake of novelty and just a part of your collection. This one isn’t one of those board games that are just gathering dust. RISK: The Walking Dead Survival Edition is actually worth pulling out to play every now and then. And even if you’re not into RISK, you may find this game to be quite entertaining.