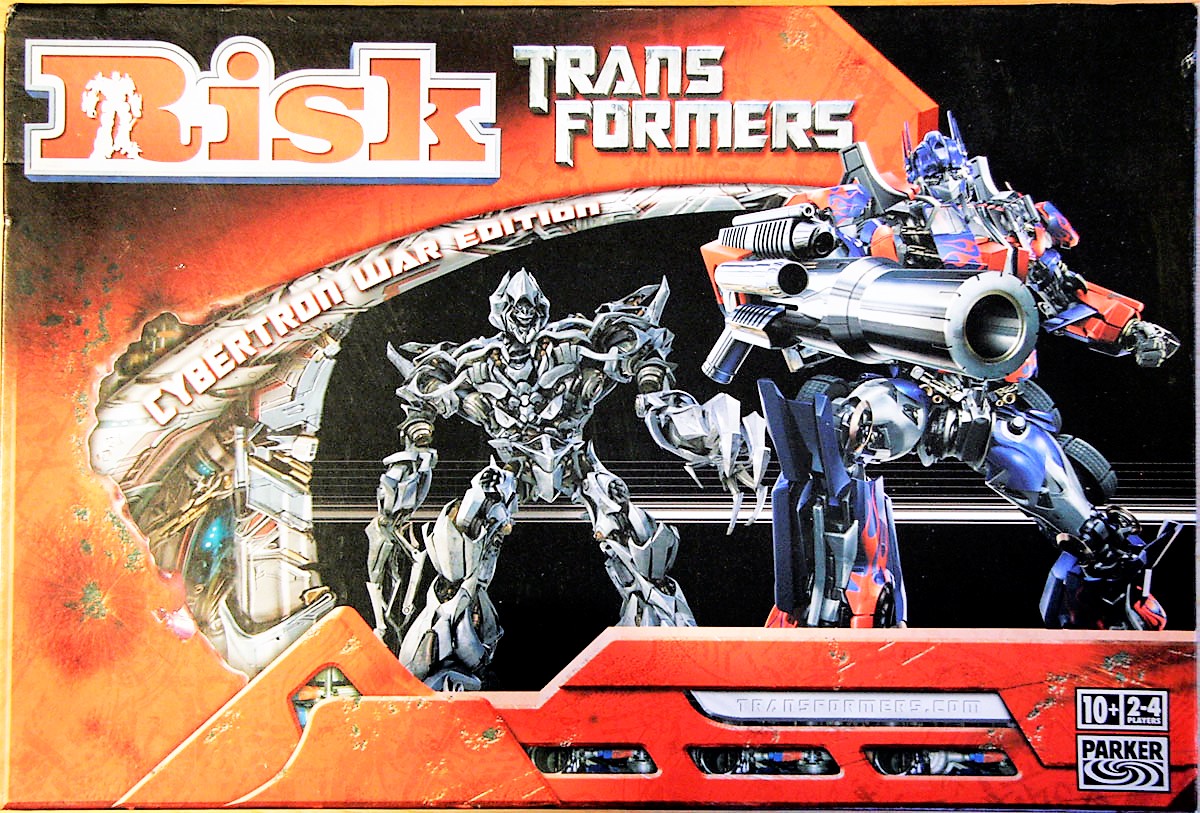 RISK has many variants that are inspired by the original version of the game, but there are some variants that stand out from the pack. The Transformers Cybertron Battle Edition happens to be one of those variants. Published by Parker Brothers in 2007 this variant was made with inspiration from the Transformers movie trilogy. While it doesn’t offer the empire building concepts made famous by the original RISK board game, this Transformers variant is a 6 turn standoff war between the Autobots and the Decepticons, with each side featuring unique abilities that adds to the gameplay.

Start playing RISK: Transformers Cybertron Battle by distributing 30 Robots and 1 Leader throughout all the zones on the game board. Each player will begin by holding 21 zones and will be given 10 Robots to attack with. Players take turns choosing where to place their Robots. The youngest player goes first and as the first player he or she will receive 7 additional Robots. The first player will place these 7 units on any zone occupied by his or her army. One point of strategy to be aware of is that the first player can possibly win as many as 7 more zones on the first turn.

After all the players finish placing their Robots in the zones of their choosing, they will then pick up a Reference Card. These cards are used to explain the different phases of play on each turn.

A player’s turn works in 5 phases. The first phase is simply for the player to place units in zones. The second phase involves the player deciding whether to use his or her Robots as Robots or transform into Vehicle Mode. Depending on which mode the Transformers are in to begin a turn, the player will always have the option of transforming into the other mode. The act of transforming from one mode to the other is determined by the playing of cards. The third phase is where the player can initiate an attack if it is possible to do so.

Finally the fifth and final phase occurs after a battle where the player picks up an Upgrade Card and will let the next player to begin his or her turn.

The battles that are waged on Cybertron are similar to normal RISK battles that occur on Earth, but with one obvious difference. The black dice that a player rolls are used to attack while the white dice are used for defense. The attacking player rolls the same amount of dice that he or she is using the amount of Robots to attack with. The defending player does the same thing. The player with the highest single dice roll will win the battle. As for the loser of a battle, he or she will remove a defeated Robot and place it in what is called the “scrapheap”, an area next to the game board where Robots can no longer be used for battle.

Most of the locations that make up the RISK Transformers Cybertron Battle Edition game board are references to the movie trilogy, though some locations not associated with the trilogy were added as well. This RISK game board has a much different layout than the original RISK game board as this board is divided into 4 different sectors. By winning zones players will be awarded Upgrade Cards that contain special efforts including the ability to transform.

In the Green Sector you will have places such as Central City, the High Council Pavilions and Nova Cronum. The Green Sector also has Unicron, the official starting point of Decepticon leader Megatron, and Pion Tower, which is one of the few mobile zones in the game. Pion Tower is a zone that can either be transformed or rotated on any given turn.

Zones like The Smelting Pool, Kaon and Kolkular are located in the Purple Sector along with 2 interesting zones. Praxus operates just like Pion Tower as it can be transformed or rotated to change the landscape of the board.

Located in the Blue Sector are places like The Praetorus Wharf, The Rad Zone, Tarn and Vos. However, the Launch Pad is the most unique zone of this sector because it serves as the ultimate tie-breaker of the game. If players control an equal number of zones in RISK: Transformers Cybertron edition, then whoever takes control of the Launch Pad will win the game.

Autobot leader Optimus Prime’s starting point would be the Autobase which is located in the Red Sector. This sector also has zones in The Neutral Territories, The Tagon Heights, the Plasma Energy Center, and the Decagon, which is hiding an extra zone called a Secret War Factory.

The Yellow Sector has zones called The Border Regions, The Space Bridge and Perihex. The Orange Sector has places like the Hydrax Plateau, the starting point for Barricade, The Sonic Canyons, and Moon Alpha, which opens up the other Secret War Factory. In order to transform a Secret War Factory, a player must control the zone that has a factory or a zone adjacent to it and have a Transform Card in hand. It is possible to open and close a factory at any time, which means that any Robots occupying a factory could get wiped out by closing a factory on a turn.

On the 6th and final turn of the game scoring of all players will be recorded. The other 5 turns leading up to the final turn are mainly used for positioning purposes. The main goal for each player in RISK: Transformers Cybertron Battle is to control the most zones after the end of the 6th turn.

RISK: Transformers Cybertron Battle is a game that doesn’t require long-term strategy as there is an easy learning curve. Experienced RISK board game players will easily get familiar with this variant as it provides a quick and fun experience. It only takes around 1 hour of playing time for a single game between 2 to 4 players.

This RISK game variant successfully captures the feeling of a classic fictional war between two factions while staying true to the core elements of playing RISK. The unique method of generating reinforcements in RISK: Transformers Cybertron Battle helps to increase the tension of battles between players. If you’re looking for a real change in the way that you play a RISK board game, or a change from way you play RISK online, then this RISK board game variant would be your answer.