RISK: The Lord of the Rings Trilogy Edition

RISK: The Lord of the Rings Trilogy Edition

The Lord of the Rings – For fantasy fans out there, this may pique your interest. If you’ve watched the epic film trilogy that is Peter Jackson’s The Lord of the Rings or been a longtime fan of J.R.R. Tolkien’s great works about Middle-earth and would like to partake in those grand battles between good and evil yourself, then this could be the perfect game for you.

RISK: The Lord of the Rings Trilogy Edition takes you right to the end of the Third Age, when men, elves, dwarves, and all else on the side of good banded together to fight against the massive forces of Mordor as Sauron seeks to reclaim the One Ring while the Fellowship aim to throw it into the fires of Mount Doom from whence it came.

RISK: The Lord of the Rings Trilogy Edition Overview

This is basically an expanded version of the original RISK: The Lord of the Rings game, with an additional board on the bottom of the original one, as well as new cards and revised rules for a better gameplay experience. As with the original, this game is set in Middle-earth rather than the actual Earth like the Classic RISK game.

RISK: The Lord of the Rings Trilogy Edition was released back in 2003 during the height of the film trilogy’s and is best played by two to four players and each game can take two to four hours. RISK LOTR Trilogy Edition is basically the Classic RISK board game with some extra cards and played on a different map. However, despite its similarities with the original RISK board game, this crossover plays quite differently.

Among the additions to the original RISK: The Lord of the Rings game are a more complete map of Middle-earth that includes Gondor, Mordor, and Haradwaith, as well as additional Territory cards, Battalions, Adventure cards, and new rules to facilitate team play. Aside from that, all the materials are based from the entire Lord of the Rings film trilogy with all the well-designed game pieces, manual, and a replica of the One Ring (which players are discouraged from wearing for obvious reasons).

The rules are similar to Classic RISK, but with additional cards. These Adventure cards are earned through entering Sites of Power with a leader piece and provide either missions for leader pieces to complete, special bonuses, or trigger “special events.” Like Territory cards, they can’t be traded.

The game is centered around the Leader pieces, which are three shield pieces per team. They add offensive and defensive bonuses, meaning they add +1 to the highest die roll on attack or defense. Only one Leader is allowed for each territory and they’re the only ones that can earn Adventure cards.

The places marked with gold icons on the map are Strongholds that provide defensive bonus and reinforcement bonus to owners. At the beginning of each turn, you may add an extra army in each of the Strongholds you control in on top of reinforcements. Defending Strongholds add +1 to the highest die roll. Obviously, taking control of more Strongholds gives incredible advantage in this game.

On the Western edge of the map, there are five Ports that can quickly take you back and forth from North to South. They are a great way to get around on the map, letting you transport your troops from one point to another more easily, so controlling them is crucial to success as well.

Then there’s the Ring’s role in the game. It represents the Fellowship’s journey to the Cracks of Doom, determined by dice rolls. When the Ring gets to Mount Doom, the game is over. This was implemented not only to tie in with the Lord of the Rings, but also add a definite endpoint to the game, while there’s no such thing in Classic RISK.

When there are 2 to 3 players in a game, the victor is determined by who has the most points once the Ring reaches Mount Doom. Points are determined by the number of Territories (1 point), Strongholds (2 points), and Regions they control (2-7 points according to indicated Region bonus).

If there are 4 players, there’s an options to play either Team RISK or Alliance RISK. The former has two good armies play as a team against two evil armies, although they don’t win as a team, and the winner is determined by points. In the latter, each team must work together to win the whole game, which is determined by either total destruction of the enemy or the One Ring either reaching Mount Doom or being found by the evil team. When the Ring ever crosses evil Territory, 2 dice are rolled, plus 1 more if there’s an evil Leader in that Territory. If the total (plus bonuses) is greater than or equal to 12, the Ring is deemed “found” and evil wins.

This is designed to help fans of the Lord of the Rings franchise to get into the game without having to get too deep into the standard RISK game rules. For the best experience possible, try playing Team RISK with 4 players in this game.

Playing RISK: The Lord of the Rings Trilogy Edition

There was much negative reaction to the initial release of RISK: The Lord of the Rings due to the exclusion of Gondor and Mordor, which were deemed necessary as it was supposed to be a battle between the forces of good and evil. Thus, RISK: The Lord of the Rings Trilogy Edition was released. While those who bought the original were left with an “incomplete” version with smaller maps, Hasbro did offer an add-on for a price.

The upgrade to this Trilogy Edition proved to be the right move as it became a more complete experience for both LotR fans and RISK players alike. However, what puts people off with this Lord of the Rings game is the chance-based outcomes that are common with RISK. Perhaps it’s not the best setting for battles determined with dice, but it still works for the most part. The addition of the Adventure cards and rules that facilitate team play add more to the game, keeping it from getting too stale.

Avid RISK players have also reported that the Ring itself makes for a rather anticlimactic end to games since it’s the movement of the Ring that somehow dictates when games end and not much effect on anything else. Unfortunately, the cards that relate to it are more than what would deem it optional. With that said, since the Lord of the Rings is all about taking the Ring to Mount Doom to destroy it, it’s still an apt mechanic for setting the tone and staying true to the source material.

On the other hand, it actually makes for better games since the Ring ensures that games don’t drag on for too long. If there’s one constant with RISK, it’s that games can get too long and people get exasperated with having to play yet another round when the sun is already about to rise during a game night. Before the objective-based gameplay first brought in for RISK: Black Ops, this game had the right idea. 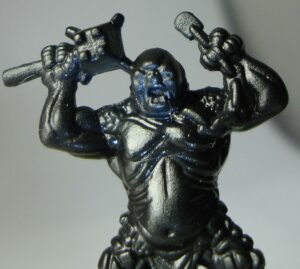 This is perhaps one of the best way to experience the epic scale of the battles in Middle-earth on the tabletop, especially if you’re already a fan of RISK. It’s also visually well-designed, making it a fitting addition to any board game collection, and even more so as part of Lord of the Rings fandom. Overall, many fans think of it as better than Classic RISK in many ways.

1 thought on “RISK: The Lord of the Rings Trilogy Edition”