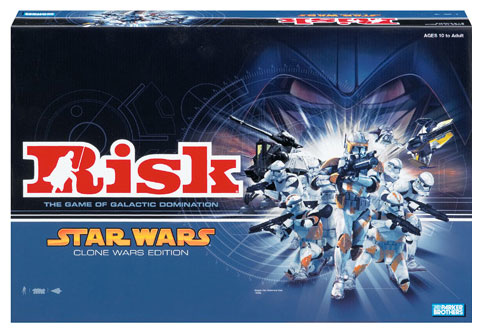 RISK: Star Wars The Clone Wars Edition: Much can be said about the Star Wars films, which can then be boiled down to the Original Trilogy being beloved throughout the decades and the Prequel Trilogy not so much. But what does not seem to get talked about enough is the Star Wars: Clone Wars animated series, which was actually great in its own right. If you had to watch anything animated that is related to Star Wars, then the Clone Wars series is certainly it.

RISK: Star Wars The Clone Wars Edition is set a year after the start of the Clone Wars on Geonosis. With the Galactic Republic engaged in all-out war against the Confederacy of Independent Systems, chaos and confusion have seeped into every part of the Republic and its citizens. It is pretty much Star Wars beyond the struggles of the Jedi and the Sith as fans know it.

In RISK Star Wars The Clone Wars Edition, you take command of either the Republic’s Clone Trooper Army or the Separatists forces and fight in different planetary battlegrounds in a galactic war that can decide the fate of numerous worlds, played out within the confines of a modified RISK board game ruleset.

Released in 2005, RISK: Star Wars The Clone Wars Edition board game came at a time when the prequel trilogy had been completed and Star Wars was undergoing a period of expansion in various media, thus culminating in what is now known to fans as the Expanded Universe well before the franchise’s acquisition by Disney and the release of the seventh film.

RISK: Star Wars The Clone Wars board game is designed to be played by 2 to 4 players and can last for up to 2 hours, depending on how well-versed the players are in playing Classic RISK and/or this particular game’s ruleset. This version of the RISK game includes the following components:

The RISK game board has planets involved in the Clone Wars, which regions that can be controlled for additional reinforcements. The core game play of RISK: Star Wars – The Clone Wars Edition is much like the Classic RISK board game, wherein you place troops, invade Territories, obtain Cards, and defend your own Territories against opposing forces. As with playing most RISK board game variations, there are a few rule changes and additions to accommodate the theme.

RISK: Star Wars The Clone Wars board game is something that tips the balance in favor of the Separatists, serving as a counter that represents how worn down the Jedi Order gets during the course of the Clone Wars. When Order 66 is finally executed, all planets under the Republic become subject to control by the Separatists, including the troops present in them. It is an action that can instantly change the course of the game.

There are 3 types of ships in this game – fighters, corvettes, and capital ships. Their presence on the board is pivotal to their owners’ success. Ships in general are built using cards, and players can buy one ship each turn. Fighters can prevent die rolls of 1, making them essential in increasing your chances in initiating successful attacks. Meanwhile, capital ships let players roll 8-sided dice instead of 6-sided dice, thus providing advantage.

The use of ships here is all about positioning, in which well-placed ships in a contested planet can greatly affect battles. Players would want ships to be as forward as possible without overextending as them being in remote planets will not do any good. Ships cannot be moved, but merely support troops that are attacking or defending a planet.

Skill Cards can be used to reinforce troops, as well as build ships and make use of special powers. They are earned by defeating enemy armies. Special powers and what they do are written on the Cards, so you must read them to understand how they can be used correctly. There are 3 types of Skill Cards—Republic Skill Cards, Separatist Skill Cards, and Anakin Skill Cards.

Compared to a lot of newer RISK: Star Wars games, this game preserves a lot more of the elements in Classic RISK, thus making it more of a RISK game than its counterparts. While many RISK fans would still prefer RISK 2210 A.D. over this, it is still a Star Wars game that can be worth the time of anyone who happens to like Star Wars and would want to assume control of an army in Star Wars.

The addition of Order 66 makes the game quite unbalanced as it easily turns the tide of the battle. All Separatists have to do is to turtle until Order 66 can be executed, after which they can then snowball until the game is won. With that said, it does simulate how desperate the situation was for the Republic during the Clone Wars.

The Republic does get a head start, receiving advantage through Separatist Secret Tiles, which let Republic players draw extra Cards at the turn in which they are taken. Perhaps the game would’ve been more balanced if more Cards can be drawn in more turns, although that may take away from the theme of the game.

Ships add another dimension of strategy in the game as their positioning can be a major factor in battle. This is something that other RISK games tend to lack, thus RISK: Star Wars – The Clone Wars Edition does have something unique and interesting going for it.

If you wish for a more balanced game, you may want to employ a “No Order 66” rule to even the odds, although its presence does make for a more suspenseful and thematic game.

There are quite a few RISK Star Wars games out there, and this is one of the better ones in terms of both visual design and gameplay. It is one of the must-play games in the lineup, if you have to play at least one RISK Star Wars game even once. It came out before Revised RISK became a real thing, yet this game does take a lot of ideas that had been floating around for a more concise yet still engaging playing experience.

With that said, playing RISK: Star Wars The Clone Wars Edition is pretty good by itself, representing the Star Wars franchise on tabletop quite well. It is certainly one of the cooler RISK games, both in looks and in gameplay.