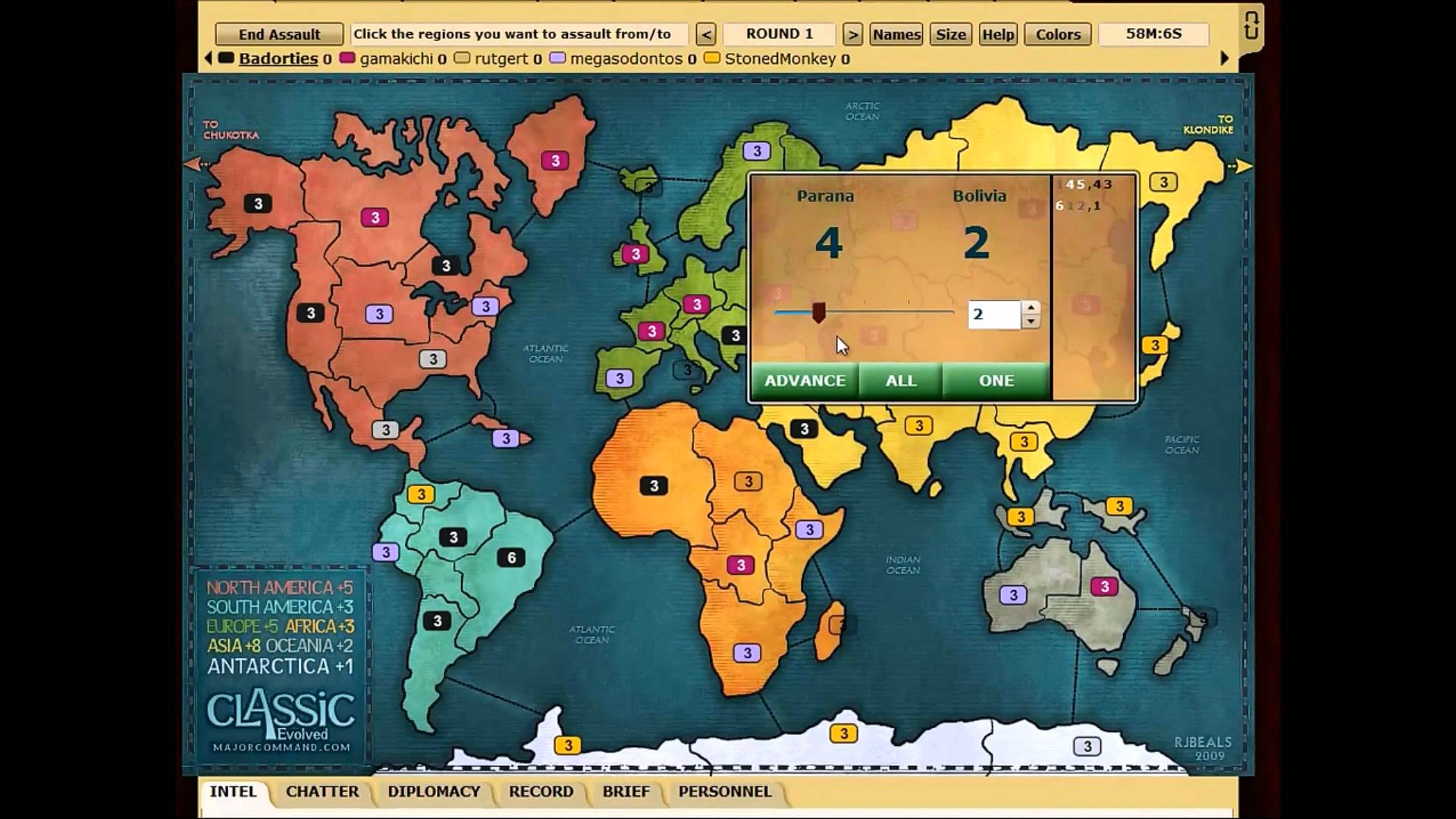 This video describes how to take a basic turn. It includes choosing the colors for your army, deploying, attacking, reinforcing, and ending you turn.

What’s up, people? Badorties here. So you’ve gotten yourself into a game. I’m going to show you how to take a basic turn. If you’ve already played similar to Major Command Risk games – conquest-type games, you’re already halfway there. It’s really pretty simple.

This is the game that I’m in. It’s in round 1 as I could see up here. I am “Badorties,” this is my color, it’s black. If I mouse over myself, it will highlight all the regions I have, same with the other people as well. You can change your color as well just by clicking here and changing your color to whatever you like. I’m always black. That’s just a color I like.

I can deploy one there, one somewhere else. Basically, you just got to use them up. When you’re done deploying all your troops, you’ll be in the assault phase. It’s why it says, “End Assault. Click the regions you want to assault from/to.” This help screen will provide some more helpful information. I usually keep it off because I already know what to do.

The fire means you’ve won. Basically you match it up with the highest roll, five to four. I win four to three. He’s down to one. I still have six. I’m going to go again and I won again. Six beats his one. Now I could choose how many people I want to move in there. You can move this screen around by dragging it. I already have a border here so I’m actually going to move them all in. I’m just going to take another chance. I’m going to go five to four with Peru and see what happens. That’s good. I’m going to do it one more time, and I’m all in again. I’m going to just click the “All” button and that just moves the all – that’s if you’re doing quick turns.

That’s it for the assault phase and I’m going to end my assault there. Click “End Assault.” Now I’m in the reinforcement page. If you check the “Brief” tab, it will tell you what type of reinforcement there is. There’s one and its path. What I’m going to do here is I’m going to click Klondike and I can only bring it to Pacifica. So, I’m going to click Pacifica and then I’m going to only put one in there. It moves it in and that is the end of my turn. It is now Gamakichi’s turn. This person has 24 hours. I click “Jump to next,” we’ll go to my next turn.

That’s pretty much the basics of how to take a turn here. There’s a lot more to do with this interface and if you click this link here, I’ll run down what all these different things are so, that’s probably your next step. Good luck.