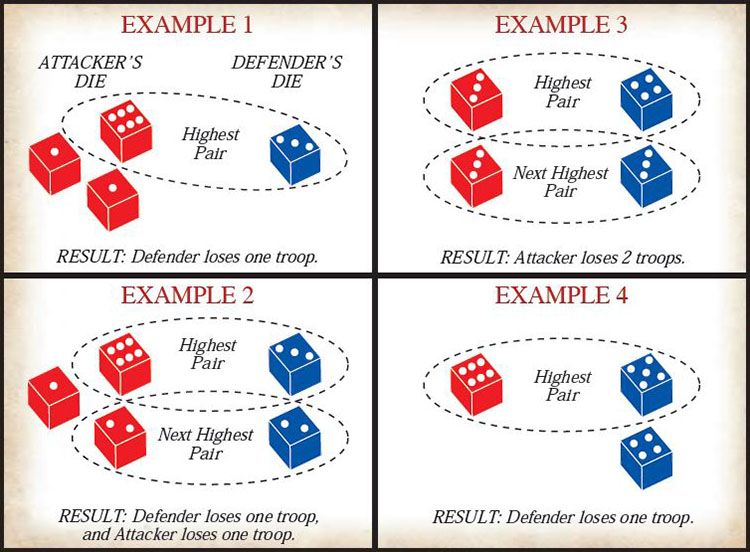 So you’ve been challenged to a game of Risk online. Well before you hit the battlefield let’s take a look at a couple of strategies that will give you some success. When you play Risk online the object is to dominate the world. There are several different ways to accomplish this but one wrong move can lead to your elimination, so you have to have some idea of what you want to do when you play Risk free online.

First of all when the game begins all participants place their armies around the world. Try not to spread yours out too far apart. Concentrate on one area at the very start. When you play Risk free online, a good strategy is to concentrate on the lower right portion of the board (Australia). This is the area that has Western Australia, Eastern Australia, Indonesia, and New Guinea. Focus on this area right from the beginning.

On your first turn you should take control of this area and then move north into Siam. When your turn is finished move all of your remaining armies into Siam. You now have this entire lower right portion under control and well protected. And you also get an additional 2 bonus armies each turn for having control of this region. And believe me; those two extra armies per turn will come in handy as the game of Risk online free goes on.

Since Siam is the only way into your area, you are now safe. Each turn you take those two additional armies and place them in Siam to build up the protection there. After three or four turns no opponent will even think about trying to get in there. Not only that, but you have now grabbed a good foothold in Asia and this will keep an opponent from grabbing an addition 7 armies per turn. So you accomplish two goals with this strategy. When you play Risk by using this opening strategy, the world is now yours to conquer.

Now you have to decide what you want to do next. If you have an army on another part of the board you can place some new ones there and start to spread out in that region and expand your dominance. The safest and most effective way (but not always the shortest in terms of game time) is to attack outward from Siam, one country at a time.

Place everything you have there and attack either China or India, depending on which is the least defended. Once you have taken control of one of these countries stop right there. Split your armies in half and move half of them back into Siam, and keep half in your new country. Collect your card and end your turn. Be short and sweet. Take a country and a card and end it right there. This keeps Siam and your Australia region secure, while at the same time having a presence in India or China that you can build outward from. If you follow this opening when you play any Risk online game you will be off to a great start down your path to world domination.

Now keep in mind someone else may have this same strategy in mind so you may have a fight on your hands right off the bat. If this is the case you have to decide if it’s worth it. If you lose this battle at the beginning of the game you will be in serious trouble and you probably won’t last too long in the game. However in most cases since this is such a small region and only gives you two bonus armies, most of your opponents won’t pay any attention to it. That’s because they are thinking big. If you think small, start small and expand your “smallness” a little at a time, in no time at all you will be so strong that all of your opponents will want nothing to do with you.

If you went after India, your next move should be to attack the Middle East from India. When you successfully hold this one split your armies between India and the Middle East. Don’t forget to put your two bonus armies in Siam to protect Australia. The rest can go to India and join forces with what you already have there in taking over the Middle East. Now you collect your card and end your turn. A little at a time, one country at a time, is how you control the world when playing Risk online.

On your next turn you have to decide which direction you want to go now. Place all of your incoming armies (minus the bonus two for Australia), in the Middle East. Depending on what your opponents have done to this point, you will want to go into Europe (Southern Europe), or into Africa (Egypt or East Africa). If either of these regions has an opponent ready to take over the entire continent you will want to move in there and stop that from happening.

As long as you make sure you expand one at a time, per turn, you should be well on your way to world domination when playing Risk online. Good luck!