Where To Play Risk Online?

If you are looking to play Risk online at Pogo.com, you are in luck! Pogo.com is a website that has many games to choose from including playing Risk online. You have the ability on Pogo to play against a computer or against other players and while Pogo.com is not dedicated to risk like some other sites, it does a good job of presenting a Risk game that is worthy of even the most hardcore Risk player.

Game players will need to sign up with an account on Pogo.com to be able to play Risk online at Pogo. There are a couple of options at sign up. You can play for free with ads or you can sign up for their premier account type called Club Pogo for $6.99 a month and play without ads. If you are just going to be playing Risk online at Pogo, it might be a good idea to go with the free account. However, if you will be playing Risk online regularly at Pogo or want to play their other games the subscription plan comes with a lot of benefits, including while playing Risk online, such as the use of a military advisor, the making alliance feature, and no ad interruptions. 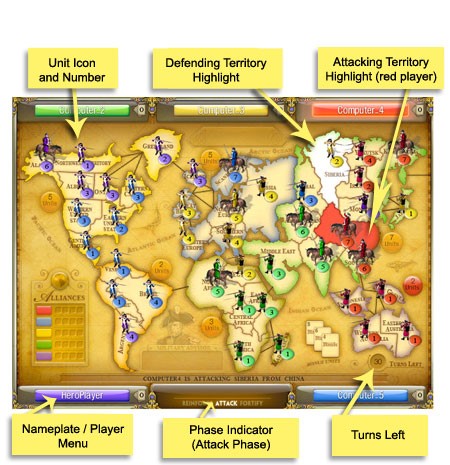 The Pogo maps are clear, with a decent resolution (1000 x 600). However, the only variation on the theme of the map is to switch to modern view which can only be accessed by members who have the Club Pogo upgraded account. The basic map is what one would expect if you were playing Risk as a board game instead of on your computer.

One downside to the map layout is there is no way to make the map full screen because it is a browser-based game. An option to solve this is to increase the view size on your browser till it feels comfortable and easy to see the unit numbers that appear under each number.

You have the option to play Risk online at Pogo.com against a computer or against other players. There are a few game options you can enable when you play such as manual dice rolls or automatic play options. The way you set up your game can determine the type of players you will play against. Those who like a hands-on approach will usually shy away from any game that is set up to play automatically.

Playing Risk online at Pogo.com has smooth gameplay with standard rules of play. At the beginning of the game, you choose your color and your territories like with the standard board game. Where playing Risk online at Pogo.com gets interesting is when you begin your attack phases and capturing territories. When a territory is captured there are on-screen animations that are simple but don’t take away from the gameplay. The gameplay is smooth and seamless as well as fast paced.

Pogo.com might not be dedicated to solely playing Risk online, but they do a good job of presenting you with a great Risk game. The graphics are nice, and the animations are a nice addition to a simple game interface. Those who want to play Risk online against real live players will find that an added benefit of playing Risk on Pogo.com is that the community is there to engage with while in game via their chat window. Not only will you be able to play Risk online but you will also be able to make some friends while you play!