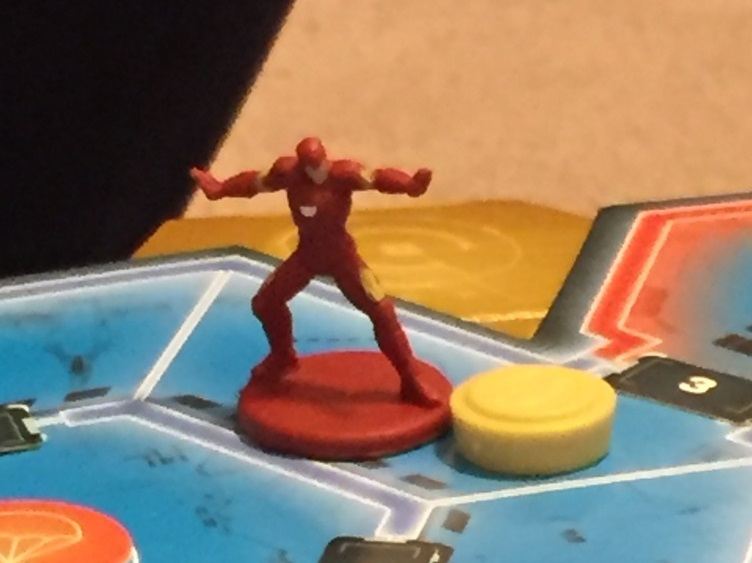 RISK: Captain America Civil War Edition is a tie-in to the Marvel Cinematic Universe, wherein circumstances force the Avengers to be divided into two factions and do battle against each other for the sake of their own differing philosophies about their role as superheroes in a world full of contradictions and compromises.

It has been well over a decade since comic book superheroes have become movie fodder, and it is still good to see Marvel characters—both well-known and lesser-known—show up on the silver screen. They have also been appearing in other things like novelizations, video games, and other merchandise. Board games happen to be a part of that shindig, and there is certainly no lack of Marvel board games available in the tabletop gaming market.

Will there ever be true justice in this world? While playing RISK won’t be able to answer that question, at least you get to play as your favorite Avenger and do battle with other Avengers in an action-packed RISK adaptation that combines strategy with lots of potential close calls and near misses.

This RISK game takes place in the same setting as the movie Captain America: Civil War, wherein the Avengers have a disagreement regarding the mandatory registration of metahumans so the government can regulate their activities. Iron Man thinks it is a good idea, while Captain America thinks it is a horrible idea that may get in the way of superhero work. For the most part, it is a pretty good excuse for pitting superheroes against each other.

RISK: Captain America Civil War Edition takes those philosophical differences and turn them into strategic problems on the board with adapted RISK game rules. As it adapts the revised RISK ruleset, games are not as long as that of Classic RISK board game. Games are set to end in five rounds, although you can extend it if you wish. The team with the higher score at the end of the game is the winner.

RISK is designed for 2 to 4 players, with players taking sides with either the team of Captain America and Falcon or the team of Iron Man and War Machine. That’s either Captain America or Iron Man in a 2-player game and two for each team in a 4-player game. Unfortunately, there is no option for 3 players unless you choose to play this game under Classic RISK game rules.

This version of RISK gives players 3 objectives to go after. For Team Captain America, getting onboard the Quinjet in order to escape with the Winter Soldier is the main objective. For Iron Man, capturing the Winter Soldier is the goal. Finally, having control over the most amount of territories counts if the previous 2 objectives are not met by either team at the end of 5 rounds.

The players do battle in an airport runway, just like in the movie. In this case, it is all about Winter Soldier reaching the Quinjet as it taxis down the runway to take off. If Winter Soldier catches a ride, it is game over for Team Iron Man. Either team can also take control of territories to gain tactical advantage through more control of the battlefield.

Aside from the game board, there are also 4 sets of 36 small troops, 4 sets of 18 large troops, 20 hero cards, 22 security gate tokens, 4 breach points, 4 turn order markers, 3 mission tokens, 2 eight-sided dice, 5 re-sealable plastic bags, 4 heads-up displays, and a Winter Soldier reference card. If it’s your first time playing the game or you just can’t figure out how everything works, then you should consult the included game manual.

You fight opposing troops, take territories, reinforce your troops, and use cards to gain tactical advantage. In any case, it is still pretty much the RISK board game that most people know, but it does have specific themes and objectives that make it feel different. It also doesn’t get too deep with the RISK ruleset due to the limited game duration that playing RISK: Captain America Civil War Edition was designed for.

Gameplay Experience and Other Comments

RISK: Captain America Civil War Edition is a pretty basic RISK adaptation that takes revised RISK game rules and simplifies it a bit further to make a game that is easier to follow for novices. Those who have been playing RISK games or a long time may find it rather different from the RISK board game they are used to, but perhaps that is what can potentially make it compelling.

The ruleset it uses is simplified, so children can learn how to play it in a fairly short period of time. This is perhaps the biggest selling point of this game as it entails family-friendly gameplay that can be enjoyed at home, best for children who are enamored by Marvel superheroes. Through this game, they themselves can be superheroes as well.

Perhaps that is why it is unfortunate that RISK: Captain America Civil War Edition only features 4 heroes as that may be too few. It would have been nice to be able to play Hawkeye, Black Widow, Scarlet Witch, Spider Man, and so on (Thor wasn’t involved in Captain America: Civil War). However, maybe due to the game being made short and playing RISK itself being limited to 5 players at most, they had to not have as many heroes here.

While it is meant to be a RISK game that can be played fast, that does mean it takes 60 to 90 minutes to finish. Perhaps that may seem long for some, but that is compared to a Classic RISK that can run games for several hours, or even playing RISK online which can go on for months and years! This is more of a game that can be played alongside other games whenever you put up a game night with friends and/or family, or even for a pick-up session to pass the time.

Some may find it bland at first due to how basic it is and how small the bonuses players can gain throughout the game are—so little that they are barely felt at first. However, with how complete the game is at a basic level, how good the quality of the pieces and cards are for the game’s price, and how kid-friendly it is.

While there are plenty that can be improved here, RISK: Captain America Civil War Edition does pretty well in its purpose of adapting the Marvel Cinematic Universe into strategic board game form.

Since it is very specific with its adaptation of a particular movie within that universe, the experience may seem limited to some as it would be nice to have more Marvel heroes to play with and more gameplay mechanics to dig into.

Being a game halfway between classic RISK and the Marvel Cinematic Universe, RISK: Captain America Civil War Edition seeks to bring both fandoms together in some measure of harmony. However, there had to be compromises and improvisation along the way to make the pieces fit.

As a part of a collection, RISK: Captain America Civil War Edition would look good in a shelf along with other RISK games or Marvel memorabilia. It is not the best, but it is still noteworthy nonetheless.